The Asian American Peace Officers of Georgia (AAPOG) was founded on Sept. 11, 2012 on the eve of the second APA Heroes & Advocates Awards & Appreciation Banquet, co-hosted by OCA-Georgia president Tricia Sung, Louis Tsang, Assistant Chief Parole Officer with the GA State Board of Paroles & Pardons, and Estrella Cramer, with UPS Asian Employees Resource Group, held on Sept. 20, 2012 at UPS Headquarters.  While the first such event was hosted 5 years ago, we gained tremendous momentum with the recent Appreciation Banquet, with approximately 40 APA law enforcement officers and their families attending.

The face of Georgia is changing.  In the past 10 years, the number of APAs in Georgia has grown 83% according to the U.S. Census.  As the face of Georgia changes, so does the make-up of our law enforcement.  We have APA officers from every Asian background--Chinese, Korean, Filipino, Vietnamese, Asian Indian, Laotian and more.  Funds we raise will be used to promote and encourage more APAs to enter the field of law enforcement.  The more APA faces we have among our first responders, the more trust and safety we build in our various APA communities, particularly those vulnerable populations that do not historically trust police.

While the current scope of AAPOG is only in metro-Atlanta areas, we hope to expand our recognition and reach statewide, and gather statistics from various law enforcement agencies of their APA members and recruits.

With over 200 in attendance, the impact of gathering a core group of APA peace officers on stage was palpable to the community.  We received tremendous feedback from the attendees, and hope to continue to locate more AAPOG officers throughout Georgia.  We want to make this an annual recurring event, and need continued sustainability to elevate our organization to the next level.  We need resources to continue to identify APAs joining law enforcement, and activate them to conduct public safety outreach to our APA communities. 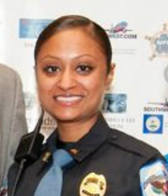 The first Asian Indian female officer in the metro-Atlanta area: "In my community, people are very proud of me...not only am the first Indian (officer), I'm a female. This is way out of the norm, for my culture, for me to do what I do. In the beginning its going to be a little scary, but its very rewarding in the end. And the sense of achievement that you feel for yourself is great.  In my culture, most Asian Indians are known to have hotels, or gas stations, or be doctors. I had to tell myself, it is okay to step out of the box. It's okay to be different." 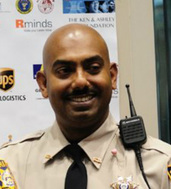 "I love the reaction of Asian Indians when they see me in uniform. They ask me if I am Indian, and then when I say yes I AM, they want to speak with me about different things, more openly, than I think they would if they were speaking with another officer who is not Indian. They also bring their kids to meet me and ask about my work as an officer." 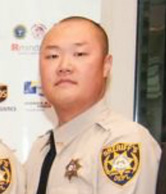 Kim immigrated from South Korea at the age of 2, and chose a career in law enforcement to use his Korean language skills to help the community. "When I was a kid, as young as 4, I used to accompany my Dad to all different places to help translate. Now I can use my Korean to help the community and make a difference."
Powered by