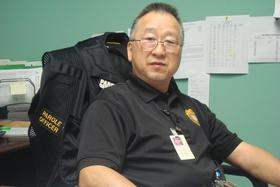 Louis Tsang has been with the Georgia Parole Board since 1989 serving in various capacity ranging from parole office, fugitive criminal investigator, federal task force agent, and supervisory parole officer. Louis has been an active volunteer and participant with the Georgia's Asian community organization as well as a member of the Advisory Board of the Good Shepherd Services of Georgia. Actively involved with NAAAP Atlanta and OCA Georgia. He currently serves as Chair of OCA-Georgia Community Service & Coalition Building.
He has always recognized that most new immigrants have an inherited dread or at least dislike of the Criminal Justice System from the native countries. In addition, Asian Pacific Islanders is the minority or a minority in law enforcement. Louis hope that his Asian ethnicity and background can alleviate some of that fear. Louis was born in Vietnam and was raised in Hong Kong with an Irish Catholic school education.