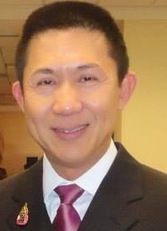 His research interests include comparative policing, community policing, police and minorities, computer crime, and school crime.  He has published numerous publications including refereed articles and book chapters.  In 2005, he received the Distinguished Scholarship Award from Kennesaw State University.  Currently, he is director of the Master of Science in Criminal Justice program.

Sutham has been involved in the activities of the Thai Association of Georgia since he moved to Georgia and served as president of the association in 2013.